Welcome to my Sea Monkey™ page.

This is yet another of my obsessions.
I have raised Sea Monkeys for several years, and it's always a fun time. 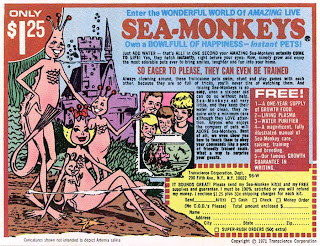 I'm going to explain some important facts about them, and tips for raising them.  Then, I'll post some of my groundbreaking Sea Monkey videos.  (Disclaimer:  Please bear in mind that I don't work for the Transcience company or any other distributor of Sea Monkey accouterments   I'm not a Sea Monkey scientist.  I've just raised many, many batches of the little buggers.)

The next cool thing about Sea Monkeys and other brine shrimp is that while still in their eggs, they can naturally or artificially undergo cryptobiosis for extended periods of time before hatching.

Cryptobiosis actually happens naturally in some animals and plants (crazy!), although it's induced artificially in Sea Monkeys by being purposely freeze dried.  It's an evolved biological survival mechanism within the creature that benefits it --- meaning --- to only hatch when the time and conditions are right. The Sea Monkey master geniuses have capitalized on this.  While still an egg, the Sea Monkey is programmed to suspend it's growth and development process during times where conditions aren't good enough to live in, such as being dried out, freezing, oxygen deprivation, etc.  The organism "knows" internally to stop functioning until conditions return to normal.  It's a very handy ability.  (Who doesn't wish that they could nap in Sea Monkey stasis until their world was made perfect to wake up into?)

Then, when everything returns to (or is made) normal - water, temperature, proper pH levels, etc. - the creature resumes functioning and activates....meaning, IT HATCHES INTO CUTENESS.


If you are raising Sea Monkeys, here are some basic tips:

There will be happy days and sad days with Sea Monkeys.  They can't all live.  I always start off with about 45-50 babies, and then the tank thins down to about 25-30.  My Sea Monkeys usually live up to about a year and a half on average.

Again, keep in mind that Sea Monkeys can only live and thrive in the special environment designed for them artificially.  If you pour them into a lake, toilet, ocean, puddle, sewer, or other watery place, they will immediately die a cruel death.  There is no possibility of survival.  (I actually had a friend that flushed her Sea Monkeys down the toilet when she didn't want them anymore, thinking that they would "return home to the ocean".  I was horrified...)

SEA MONKEY NERD DREAM ALERT: If I ever won the lottery, I'd like to have a Sea Monkey Build-a-Tank and Rehabilitation and Adoption Center (*cute and catchy acronym name forthcoming).  You could design a tank (theme, colors, shape), buy supplies, adopt or surrender Sea Monkeys for others to adopt.  Or - you get connected with other Sea Monkey nerds, or babysit/foster Sea Monkeys for people for vacations, moving, etc.  I'm suspecting it's slightly a niche market, but...one must have dreams...

MORE COOL FACTS ABOUT SEA MONKEYS:
Sea Monkeys do not have brains.  They have special nerve groups called ganglia that tell them what to do.
Sea Monkeys are born with a 3rd eye, which they lose as they become adults.
Sea Monkeys breathe through their legs.
Sea Monkey kidneys are in their heads.

I stare at my Sea Monkeys for long periods of time, every day.  It's practically a form of meditation for me.  I also make silly videos of them.  All of the videos below are mine, made in my house, with my Sea Monkeys over the past few years.

CLICK ON ANY OF THE TITLES BELOW TO SEE MY SEA MONKEYS IN ACTION!

Monkeys on the Moon (2-day-old babies)

A week in, and they finally look like real Sea Monkeys. Plus some groovy moog-type music

Crazy feeding frenzy at the bottom of the tank!

A few years ago, I created a  12x24" stained glass mosaic in a window frame depicting a human in a Sea Monkey body: 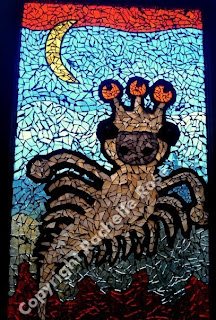