When I was a little kid growing up in Texas, I was really fortunate to have relatives in the Los Angeles area.  So luckily for me, I got to visit Disneyland a few times between age 5-15 in the 1970s and 80s.  One ride there freaked me right the hell out, but simultaneously thrilled and fascinated me.  I still think about it and relive it mentally, even now.  I was kind of obsessed with thinking about it, remembering it, and thinking about all the details and how they made me feel...over and over, throughout the years.  It had a profound impact on how I think about things now.  It was called Adventure Thru Inner Space.  It was in Tomorrowland.  It was a ride where you got to experience shrinking down to the size of a molecule and seeing the inner space of water, within a snowflake.

The first time I rode it with my cousins when I was about 5, we were waiting in line and I saw that the moving and swiveling bowl-shaped seats of the "Atomobile" went through a "shrinking tube" during the process, and tiny little people were riding through the other side.  I asked if we were going to do that.  Are we really going to shrink?  For real?  What if the ride breaks and we stay small and we're stuck in there?  I was practically jumping out of my skin with fear.  My cousins insisted that we were all definitely going to be shrunk down - and "Look at all of the little people in that tube- see there?  Those were the people waiting in front of us in line.  They're tiny now!"   I was wigging out and totally believed them.  Completely petrified and mystified. 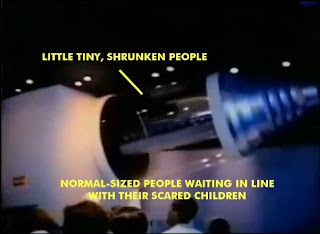 
The voice actor, Paul Frees, who narrated the ride, was also the voice of Little Green Sprout, Ghost Host of the Haunted Mansion, and Ludwig Von Drake, among a gazillion others.  (Can you believe that?  He had a 4-octave vocal range.  His body of work is nothing short of astonishing and I'm in awe.)

The ride was almost completely in the dark, adding to the suspense.  There was also the excitement of a Goodyear Peoplemover, cutting right into the whole experience.  Far out and progressive, man!  It was very sciencey. 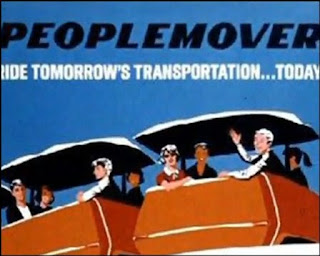 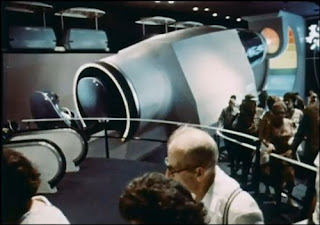 You shrank and watched the snowflake that you were studying get seemingly enormous.

Then: "...Suspended in the timelessness of inner space are the thought waves of my first impressions.  They will be our only source of contact, once you have passed beyond the limits of normal MAGNIFICAAAATIONNNN."

Uhhhh, say what now?  You said that your brain words are basically frozen as sound waves that we are now hearing?  In a microscope?  That we are shrunken inside of?  This was also unsettling to me as a youngster (not so much at age 5, but a few years later - when I started to really think about what Paul Frees was saying).  It made me think that I really, really, really do not understand how things work on Planet Earth.  Does that mean that everything that anyone ever said is somehow amplified into tiny molecules and repeating until the end of time?  Wuuuuuuut...? 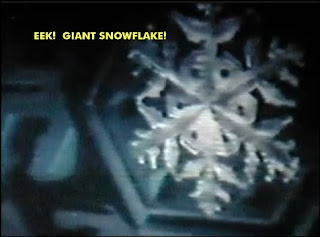 Anyway, the ride goes on in the dark, and you continue to shrink and ponder the almost Kafkaesque, quantum perspective you're trapped in.  You're alongside infinite rows of water molecules, inside a section of the snowflake. Then you're in between the spaces of the molecules, followed by the electrons zipping by in straight, streaky lines.  And then it looks and feels like you're in big, outer space, but you're not.  You're smaller than all of the molecules and electrons and you're floating in between the inner spaces of all of it, so it looks like a tiny universe, and you're staring at a nucleus....within the particles of a drop of freaking WATER. 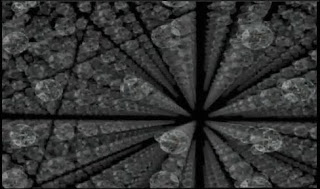 Then, after the GIANT EYEBALL BEHIND THE MICROSCOPE (which incidentally gave me nightmares for decades - not unlike the fucking terrifying-looking Helix Nebula) is staring at you, the ride is over, you've been restored back to your normal size, and all is well in sunny Anaheim.  A happy and mindless (but sort of rad) song is played to ease and erase the mind-altering craziness that you just went through as a 5-year-old.

The thought-provoking idea of this 1967 ride still totally blows me away.  Who would think hmmmmm, I think it would be cool to ride through the inner space of water molecules?  And what would that look like?  Or sound like as a story?  But then again, it was the late 60's...so.......ummmm, yeah.
I know that Jules Verne had something to do with that idea as well, and Fantastic Voyage had only come out in theaters the year before.  And there was kind of a shit-ton of hallucinogens being consumed by eager, young folks seeking enlightenment.  I guess I'm not that surprised, come to think of it.

Anyway---Here is a really well made virtual ride-thru of Adventure Thru Inner Space from YouTube:

GET ON YOUR BIKES AND RIDE! ---> Click here to see ADVENTURE THRU INNER SPACE

And here are some miscellaneous pictures from days of yore: 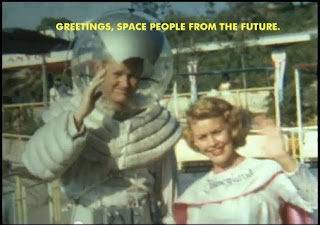 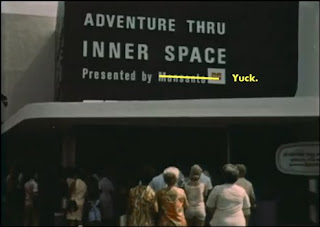 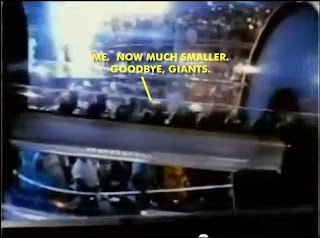 Sadly, the ride closed down in 1985.  Along with it and a few other attractions, actual real SCIENCE seems to have drifted away from Tomorrowland too, and has been replaced with typical movie dreck and merchandising.  I think the Star Tours ride now sits in the same spot that this ride once resided in (okay, I liked Star Tours back in the day).  I am totally cool with all the movie-themed stuff in the rest of the park.  That's what Disneyland is all about, obviously.  But Tomorrowland needs more of an educational, scientific focus. JMHO.

This whole concept needs a reboot.  I really hope the imagineers do some reimagineering and consider redoing this most excellent ride.

*Let me also mention one other thing at Disneyland that freaked me out.  I rode the Haunted Mansion ride many years ago and the ride broke down and got stuck in the cemetery for quite a while.  I fought a panic attack in the dark for what felt like a lifetime.  ACKKKKKK.