See ya, year.  We had some good times.  We had some sucky times.  2013, all eyes are on you.  Let's do this.
And also, let's skip all the horrific death and suffering.

And also, less people going to the grocery store in actual pajamas (have a little civility, wouldya?).

The hills are alive with the sound of Jake, Elwood, and the blues

We were watching The Sound of Music a few days ago, and we realized that The Blues Brothers movie is basically The Sound of Music, set in Chicago with the blues.
Eerie coincidences, woooooo:
It's a musical.
The protagonist(s) are on a mission from God, each directly from Catholic school/abbey, and sent by Mother Superior.
The Von Trapp children are essentially Murph and the Magic Tones.
The kids/musicians are being promoted for a big show, throughout the entire movie.
They're being chased by nazis.
Cab Calloway parallels the Von Trapp uncle who is a concert promoter.
There's also the jealous and evil girlfriend in each film: The Baroness in TSOM, and Carrie Fisher in TBB.
There's a happy ending in both, except for Jake and Elwood ending up in jail... But -- the Von Trapps escape into the mountains and Jake and Elwood get the money needed for the orphanage.
See, not so weird, is it?  It would have been kind of fun if the Blues Brothers and their band did a puppet show.  But instead they crashed a shitload of cars in a shopping mall.  So there's that.
at December 30, 2012 No comments:

This here's my stepkid with a gorgeous new 12-string.
The guitar count in the house is steadily rising as the teen years manifest. 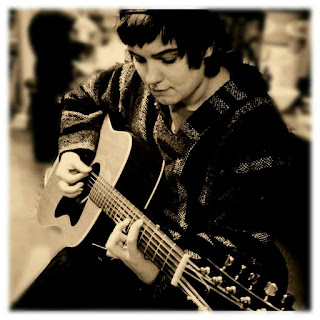 A few years back, my husband and I went through a funny Peruvian phase.  We wanted to decorate with pan flutes and miniature llamas and brightly colored woven yarn sculptures.  We bought a CD from those Peruvian dudes that always have their table set up next to the Space Needle.  We also bought some Peruvian doodads from a some other Peruvian guys' table at the Houston Science Museum.  I frequently imagined my whole house covered in decor from Cost Plus and went completely coo coo for cocoa puffs over any sort of llama art. Sometimes I wore a Peruvian crocheted hat.
I have never been to Peru.
Neither has my husband.
I'm not sure either of us will ever go there in our lifetimes.
I doubt it.
We got over the Peruvian thing, but we still have one pan flute hanging in the bedroom.  Just to remember.
at December 18, 2012 No comments: