I love my fiesty child.

I have nostalgic admiration for AC-DC. Theirs was the first rock concert I ever went to, in the 80's (For Those About to Rock!). My older brother used to play "Back in Black" over and over and over. It was floor thumpy, window rattley goodness. It kinda gave me the invincible teenager feeling, having my entire rib cage reverberating to arguably one of the coolest guitar riffs ever, about 46 times in a row most evenings, for weeks on end. Good times.

My 11-year-old daughter discovered AC-DC one day, when one of their songs was used in a movie. She said, "Mom, who is this? This is awesome music." I was psyched to pass the Tween Torch of Coolness to her, and I quickly went to iTunes to find some AC-DC for her.
Wahhhh wahhhhhh...NOPE. NONEXISTENT. Say whaaaat? Did I type it wrong in the search box? Should I have used a slash? A hyphen? A backslash? Did I get all 4 (really, 3) of the letters right? The answer, after a little research: None of the above. Turns out, AC-DC feels "very strongly" that their album Back in Black should be bought and listened to in its entirety, and not broken up into individual songs, because that would go against the listening experience that they intended. So, sorry AC-DC fans, due to their feelings of artistic purity, AC-DC refuses to have their songs sold via iTunes.

Okay, fine. They clearly have strong feelings that mimic........ oh, I don't know.......integrity(?) about how their music should be absorbed. I can dig that. Artists can be picky about how their messages are received. Whatever. I get it.
OF COURSE it's about the music, not the commercialism.

Alright, now here's my point: Tomorrow is Thanksgiving. But we consumerey Americans all know (sadly) that Thanksgiving has become a brief, food-comatosed, cranberry-infused segue into Christmas and the atrociousness known as Black Friday. That's another rant for another day.

BUT, as I watched tv last night and was visually assaulted by all kinds of holiday sale commercials for chain stores and malls, imagine my surprise when Walmart was using the song "Back in Black" as it's theme song for its Black Friday craziness sale.
Walmart.
And by "surprise," I mean disgust.

The band won't let me buy their individual songs on iTunes for a few bucks because that's not how they "intended" for me to listen to their music, but they are more than happy to sell out to Walmart for 30 seconds of multi-gazillion dollar airtime.
Gross.

Krissi's Art Studio: The How-To on How-To's Part I (Photos)

Wow - someone quoted me. Awwwww, thanks, Krissi.
at November 22, 2011 No comments: Links to this post

So far, there's only one thing on my list: Plants.
Once you have a demanding newborn in your arms, your priorities change. In other words, unless you can afford hired help, or you live with your parents, or you are prolific like the Duggers and already have a myriad of older children to raise your newer children, you won't be able to do ANYTHING AT ALL for a few months except hold, feed, placate, and change diapers. You won't be able to remember the last time you brushed your hair or took a shower. You won't have time to pee. Your sleep will be occasional and not very restful. You will lose track of time and go into a bizarre place on the time/space continuum where you don't know what day or week (or possibly season) it is.

That said, any young potted plants or herbs will not get watered, and instead will wither into a sad, premature death as they take a backseat to little deuce. I let 2 tomato plants and 1 basil plant sit in my front yard, untouched. The guilt still haunts me.
at November 14, 2011 No comments: Links to this post

You know it's going to be a weird morning when a platter of chicken and chiles initially looked like a portrait of orange, swirling demons.
Perhaps I should have saved the Lovecraft book for reading after breakfast.
Also, wearing my glasses would have helped.
at August 12, 2011 No comments: Links to this post

Yes, it's true. I've given birth to a mountain lion.

Hello from the land of Please Don't Put Me Down Ever Ever Ever Or Else I Will Scream Until The End Of Eternity.

This little dude growls like some kind of grunting cat. It goes on and on and on. Both my husband and I were told by our moms that we were "easy babies" that hardly cried or fussed at all, followed by being quiet and obedient sweet toddlers, so where did this growling little bobcat come from? Did I eat too many mangoes or something during my pregnancy? It's okay little Simba. I still love you.
at August 10, 2011 No comments: Links to this post

From the land of the ridiculous and dumberer...the Baby Bullet

Okay, let me first say that I love gadgets and cool appliances. I sometimes get suckered into late night television infomercials and have been known to occasionally whisper to my husband, "Honey...are you awake? Hey. We need one of those...Look at this thing..." So don't hate.

But - I have issues with the Baby Bullet. What does it do that an immersion blender and some recyclable plastic storage containers cannot? Oh wait - I know. They can't SMILE AT YOU. Because the Baby Bullet and its components all have happy faces printed on them, much like the Kool Aid Man. Everyone knows that baby food is just of a higher quality when it was made in an appliance with a face on it, right?

The short commercial also has spokesmothers who are so easily impressed and dull, that they must apparently need the happy face painted onto the belly of the blender, because certainly it's not on there to invite an infant or a toddler to handle a sharply-bladed electrical appliance (at least I'm hoping, anyway, yikes).

Here's what vapid, upspeaking valleygirl spokesmodel #2 (who follows the over-enunciating brunette with the giant teeth) says during the commercial:
"And the best part of it is that you have the little dial...???
And you can...ummm...put the little date on it...???
So........you know when it's good until...."

Yes, she ended her sentence like that, with the word "until" (nice). And for her, the "best part" is not how incredible and efficient the appliance is at making food for her growing infant, but that the containers have the little dates on them. (Did I mention that she sounds like she is on animal tranquilizers?)

The commercial never actually says how much the Baby Bullet costs. It just offers a free 30-day trial. WHAT? As if there weren't enough red flags already hemorrhaging out of this commercial, if this isn't a red flag - well then, I don't know what is.

And now, back to your regularly scheduled programming.
at June 12, 2011 No comments: Links to this post 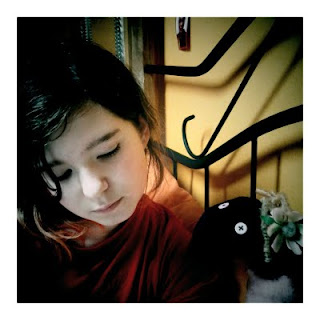 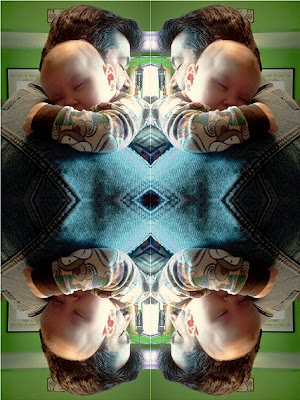 Having an Amelie moment

For once, shockingly, the tv isn't on in the livingroom (why is our family so loud?). This forces me to focus on background room noises:

The clicking of my maneki neko kitchen chochkey,
The tapping sounds of my computer-game obsessed first born, and
The rhythmic snoring of the infant on my lap.

Sort of avant garde noise opera. But probably only interesting to me.

And the award for inappropriate coincidence of the day goes to.........

ME, for pulling up to a shopping mall street corner with Tiny Tim's "Livin' in the sunlight, lovin' in the moonlight" playing on my cd player, with the kids in the backseat, as a homeless man stood there begging for money and food.

Right as we pulled up to the red light and the homeless man stared right into my eyes, holding up his ratty cardboard sign in my direction, Tiny Tim sang, "Things that bother you never bother me..."

It made me feel awful, even though that man didn't hear us.
Actually, things that bother him really bother me. A lot.
at May 29, 2011 No comments: Links to this post

This is a test.

I totally forgot that I had this blog.  I went to create one, and tried to use the name "the-angry-kitten," only to find that some biyotch took it!  Unavailable!  Boo!  Grrr!
Great, so who uses my other pseudonym, and should I create another web name...because lord knows we don't have nearly enough usernames and passwords to keep track of, right?

I went to see who it was.  It was me.  Oops.  I forgot I signed myself up a few years ago.